Bert Easterbrook is an iconic hero of the Vancouver riot.  After a swarm of hundreds of rioters surrounded and started smashing a city truck, Easterbrook and a couple other men attempted to reason with the crowd.  Easterbrook valiantly attempted to prevent the rioters from lighting the truck on fire as shown in this video. 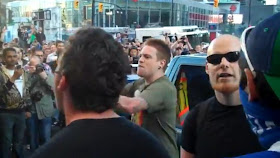 Eaterbrook is a 32-year-old photographer, care worker for disabled people, and an occassional security guard for pro-marijuana rallies in Vancouver. Easterbrook is reportedly 6'2" tall, weighs 255 lbs, and is a "karate expert."

When he saw a crowd attempting to roll over a green pickup truck, he and some other brave men rose to action and stood around the truck attempting to talk some sense into the rioters. At one point, a rioter threw a wad of rolled papers that had been lit on fire into the truck. Easterbrook grabbed the wad out of the truck, burning his hand in the process.

Another rioter threw another bag or bottle that had been lit on fire into the truck and then Easterbrook had decided he had enough and leveled the rioter with what appeared to be a powerful right hook to the rioter's face. 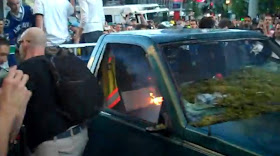 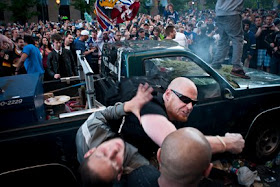 After the punch, 15-20 rioters swarmed Easterbrook while throwing punches. Easterbrook grabbed another rioter as he fell to the ground and endured a pummeling for about 15 seconds until nearby police walked over and the rioters dispersed. 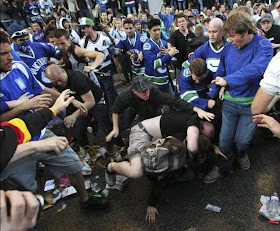 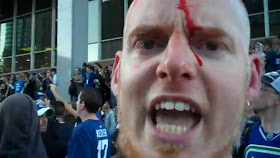 Bert Easterbrook is a true hero for standing up to the rioters.
Concerned Citizen at 9:25 PM
Share